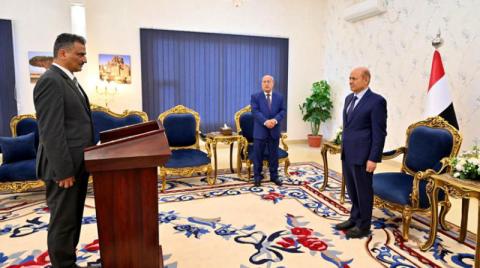 At a time when the Yemeni state bodies, after their return to the temporary capital, Aden, continue to establish to start the tasks of the new political phase under the title of partnership and consensus, the Presidential Leadership Council issued a decision appointing the Governor of Aden, Ahmed Hamed Lamlas, as Minister of State in addition to his position, and Muhammad Al-Ghaithi was chosen as the head of the Consultation Committee. And the Reconciliation, an auxiliary body comprising 50 Yemeni figures, which was formed with the Presidential Leadership Council pursuant to the decree of transferring power on the seventh of April.

This came at a time when the Yemeni parliament approved, yesterday (Thursday), the financial statement submitted by the government and the budget for the current year after extensive discussion, with a request that the government provide answers to the inquiries, observations and questions submitted by the representatives in the coming days.

A senior Yemeni official told Asharq Al-Awsat, “The state institutions are now working officially and legally, and the parliament is monitoring and holding accountable, and this means activating the supervisory authorities and controlling the work of the government.”

Meanwhile, official sources reported that the Presidential Leadership Council, headed by Rashad Muhammad Al-Alimi, held its first meeting in the temporary capital, Aden, with the Consultation and Reconciliation Commission, which consists of fifty members representing all national forces.

In the meeting, which was attended by council members Aidarous Al-Zubaidi, Sultan Al-Arada, Tariq Saleh, Abdullah Al-Alimi, Othman Majali, Faraj Al-Bahsani and Abdul Rahman Al-Maharami, “everyone emphasized the spirit of consensus and partnership as a title for the transitional phase.”

Saba news agency quoted the President of the Presidential Leadership Council as saying that, in a speech at the opening of the meeting, he expressed his hope that the Consultation and Reconciliation Commission would be of assistance to the Council, and that its members, who have experience in political and administrative work, would be at the level of responsibility.

Al-Alimi reiterated, “emphasizing the need to embody the spirit of consensus and partnership during the coming period. He also reassured the attendees that the Presidential Leadership Council is working as one team.”

Addressing the members of the consultative body, he said, “Our people expect you to work to embody consensus in order to help the Leadership Council, and this, in turn, will reflect on the interests of the Yemeni people and their aspirations for good, development and peace.”

Al-Alimi added, “I and my brothers, members of the council, are counting on your wisdom, and this wisdom must be reflected in compatibility with future work through the presidency of the body that will be chosen to assist the council.”

Since the Presidential Council took the constitutional oath (Tuesday) before the House of Representatives, its members have begun to hold a series of intensive meetings in order to translate into reality the priorities announced by Parliament Speaker Rashad Muhammad Al-Alimi.

The statements of the Presidential Leadership Council came after the agreement to choose the leader of the Southern Transitional Council, Muhammad al-Ghaithi, as head of the Consultation and Reconciliation Commission, along with four members representing various currents, namely Abdul-Malik al-Mikhlafi, Sakhr al-Wajeeh, Jamila Ali Raja, and Akram al-Amiri.

The “Yemeni Presidential”, headed by Rashad Al-Alimi, discussed in a meeting (Wednesday) the service and living conditions and the normalization of the situation in various governorates, especially in the temporary capital, Aden.

According to what the official sources reported, the meeting included members of the Council, Aidarous Al-Zubaidi, Sultan Al-Arada, Tariq Saleh, Abdullah Al-Alimi, Othman Majali, Faraj Al-Bahsani, Prime Minister Moeen Abdul Malik, and Aden Governor Ahmed Lamlas, as the meeting stood “in front of a matrix of urgent service requirements.” In the fields of electricity, health, roads and sanitation, and a number of urgent decisions were taken in this regard.

The meeting focused on the main service sectors needed by the temporary capital of Aden, specifically electricity, water, sewage, education, health and vital facilities, and also discussed “the necessity of translating the priorities set by the Chairman of the Leadership Council before Parliament.”

For its part, the Yemeni parliament approved, yesterday, the government’s budget and its financial statement, after voting during a session chaired by Parliament Speaker Sultan Al-Barakani and in the presence of Prime Minister Moeen Abdul-Malik, with a request that the government provide answers and clarifications at a later time to the representatives’ inquiries and questions regarding some aspects of the submitted statement.

The parliamentary committee formed to discuss the government’s statement had emphasized, earlier, “to absorb the recommendations and observations submitted by members of the Council on the national, economic and development issues contained in the statement and other aspects, foremost of which are issues related to citizens’ lives and living conditions and overcoming the current challenges in the country.”

The movements of the new Yemeni leadership, represented by the Presidential Council, along with the rest of the government institutions and agencies, coincided with the continued violations of the UN armistice by the Houthis, as the army accused the coup group of committing 80 violations last Tuesday, on the fronts of Marib, Al-Jawf, Saada, Hajjah, Al-Hodeidah, Taiz and Al-Dhalea.

These violations, which amounted to close to 2,000 violations, according to the Yemeni army’s statistics, since the start of the truce at the beginning of this month, the UN envoy says, did not affect the steadfastness of the truce, which he hopes to build for its continuation after its end at the end of next May, and he also hopes that it will lead to talks lasting peace