The port investigation reveals the “judicial islands” in Lebanon 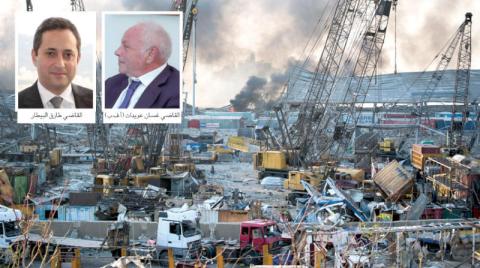 The conflict broke out within the Lebanese judiciary against the background of the investigation into the Beirut port explosion, revealing the competition of interests between the “islands” that make up the judicial body, which arose mainly as a result of the interference of political references in judicial appointments, so that most judges implemented the interests of their “references”.

The “war” currently raging is taking place between the judicial investigator in the explosion, Judge Tariq Al-Bitar, who has become almost alone in this battle, and the Public Prosecutor, Judge Ghassan Oweidat, who enjoys the absolute support of prosecutors in all public prosecution offices.

Al-Bitar’s decision to resume his investigations was the spark that ignited the “war”, as not a few hours had passed since he issued a new list of allegations that included Judge Oweidat, until the latter responded with a counterattack, so he made a sudden decision, ordering the release of all 17 detainees in the port file, and instructed To the prison administrations where they are being held to release them.

Oweidat followed his decision to charge Al-Bitar with the crime of usurpation of power, summoned him to an investigation session to be held next Thursday, and sent a memorandum informing him of the need to appear before the Public Prosecution Office of the Court of Cassation, but Al-Bitar refused to receive this memorandum.

Oweidat also sent a letter to the Director General of General Security, Major General Abbas Ibrahim, requesting that Al-Bitar be prevented from traveling. Al-Bitar replied that he is still “the judicial investigator who has his hand on this file and will not give it up.”

In addition, the severity of the living crisis in Lebanon, which has reached catastrophic levels, is exacerbating, with the continuous collapse of the value of the national currency.

In its latest report, the World Bank omitted economic forecasts for Lebanon as a result of the increasing degree of uncertainty, and indicated that the country’s future outlook is still hazy, noting that the Lebanese economy was severely affected by the rise in energy prices and the slowdown in global economic growth.
.