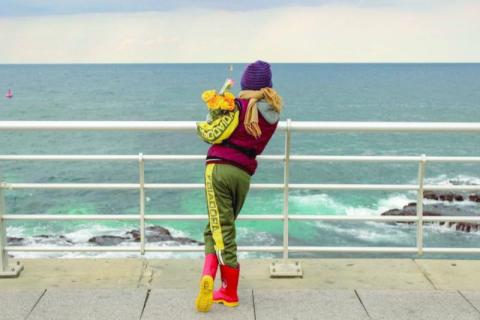 It presents photographs that tell about the peculiarities of the capital

Since her childhood, Aya El-Khoury has been developing her talent for photography. She studied landscape architecture and graduated from the American University of Beirut, with the ambition one day to pursue her hobby on a large scale.

Recently, she tightened her belts and decided to embark on a photography trip highlighting the characteristics of the city of Beirut that she loves. And it resulted in an exhibition that you are holding today at “Dar Al Musawwar” entitled “Beirut Always Forever.” Why Beirut? “Because I simply belong to her and love her by my side, and every time I watched her moaning and rejoicing, she exploded and grew older and became more and more attached to her. After all, it is still, in my opinion, the most beautiful city in the world. Through this exhibition, I wanted to express my love for it, as well as to introduce people to its features.” Thus, Aya El-Khoury explains the reasons for choosing her city, Beirut, as the subject of her first photographic exhibition. And she continues, in an interview with Asharq Al-Awsat: “The closer I get to Beirut and I get to know it closely, the more I love it. Its people, as well as its buildings, alleys, and neighborhoods, are vibrant with life, and they reinforce this warm relationship that is born between it and its visitor.”

Dozens of photos taken by Aya with her lens, moving between Beirut’s neighborhoods and streets. She visited popular Beirut and other high-end areas, and picked up from them what she thought of her.

Between the new road, Hamra Street, Ain al-Marisa, Bourj Hammoud, Souk al-Tayyib, and others, Aya made a way to communicate with her city. “All the pictures were so intuitive and spontaneous that I was attracted to several scenes without warning. In other places I stood and meditated, and decided that my camera would transmit details about my city that I was ignorant of.”

You look at the pictures of the exhibition “Beirut for ever and never” and you will see a picture of a fisherman facing the White Ramlet Sea, who thinks that he is a bronze statue. On the other hand, he depicted an antique Beirut shop under an olive tree. And offset by another, which highlights Aya al-Bayrouti’s love for his city. Her lens depicted a man carrying a luxurious chair from his house, to make it his headquarters in the middle of an empty street in the new road. He recites poems from him while he is wandering in Beirut, which he loves. In another painting, we see the “Egg” building in the center of Beirut in black and white. He is a living witness to Beirut in the days of glory and war, and even to the October 17 revolution.

“I was greatly affected by this experience, especially as it was rich in my communication with the people of Beirut, so I discovered the extent of their kindness, simplicity and love for the guest. I found in them the hope that I miss, because they are fond of their capital and accept it with its sweetness and its bitterness.”

Aya titled her paintings with the names that she created from the womb of her impressions and feelings that swept her during the filming process. During which she will learn about “The Throne”, “Dough Dance”, “Catching the Sunset”, “Between Memory and Longing”, “Jewels” and “Rizkt Bahr”. She is 23 years old, and unlike her generation of Lebanese youth, she adheres to her city and highlights its beauty, refusing to emigrate and leaving the capital alone and empty. “Indeed, my goal was to draw the attention of photography enthusiasts of my generation to the charm and splendor of Beirut. I wanted to give them hope and point out the importance of our city of which they know so little. I even entered the depths of popular neighborhoods, and took pictures of old places and shops, to remind them of the legacy that the people of Beirut leave us, and we should not neglect it.”

The Beirut Sea and the Ramlet al-Baida area, as well as the Raouche Corniche, and the quarrels between two different generations, Aya transmitted it through the lens of her camera. Through it, she referred to this ornate mixture that Beirut enjoys without other cities in the world.

And she concludes, in the context of her interview with Asharq Al-Awsat: “I learned a lot from this experience, the most important of which is knowing and appreciating my city. Sometimes we pass unnoticed by a heritage building or a colorful building and a wide sea, and we can hardly see it. Beirut provided me with optimism about a beautiful tomorrow, and I felt that I loved it more. The waves of its sea and the chatter of its people, as the screams of vegetable sellers in it, stole my heart and my camera. And I hope that through my art, I have given her a gift that I cherish, as I have become an integral part of a solid city.”