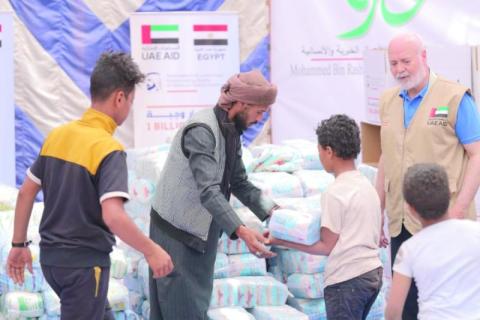 The “Billion Meals” initiative achieved its goal by raising one billion dirhams ($272 million), after the campaign succeeded in collecting 600 million meals, and Sheikh Mohammed bin Rashid Al Maktoum, Vice President and Prime Minister of the UAE and Ruler of Dubai, contributed 400 million meals to complete the campaign. One billion meals, according to what the Vice President of the Emirates announced yesterday (Wednesday), while the number of donors reached about 320,8 thousand.
Sheikh Mohammed bin Rashid said: “Thank God, we conclude the (Billion Meals) campaign, with a record sum of 600 million meals so far, donated by institutions, companies, businessmen and 320,000 individuals. Today, we announce personal support for the campaign with about 400 million meals to complete the billion meals. We ask God May he and you accept fasting, reading the Qur’an and feeding food in this holy month.” He added: “The (Billion Meals) campaign expresses the true values ​​of the people of the Emirates, and expresses this people’s sense of the suffering of others in the midst of food conditions and challenges that the world is witnessing.”
For his part, Mohammed Al Gergawi, Secretary-General of the Mohammed bin Rashid Al Maktoum Global Initiatives, stressed that the record results that exceed expectations of the “One Billion Meals” campaign confirm that the UAE continues to advance its humanitarian mission globally, as an effective contributor to international efforts to confront and overcome humanitarian challenges. And through its constant keenness to provide full support to humanitarian issues in the region and the world.
Sheikh Mohammed bin Rashid continued, “The (Billion Meals) campaign and other humanitarian initiatives launched by the UAE have been able to achieve a qualitative leap in the fields of relief aid through many innovative initiatives, including food feeding initiatives that coincide with the blessed month of Ramadan every year, which It evolved from 10 million meals two years ago to 100 million meals last year, and then expanded to one billion meals this year, amid a record turnout for contributions from philanthropists, white-handed people and benefactors.
The “Billion Meals” initiative represents the values ​​of the Mohammed bin Rashid Al Maktoum Global Initiatives, which aims to involve everyone in charitable and humanitarian work from individuals and institutions from various sectors in the UAE and the world, with its focus on the concept of sustainable community financing to provide food support and elements of food security for the most needy groups. And it opened the door for participation in a comprehensive community movement aimed at weaving a network for those who cannot find food to eat.
The “Billion Meals” initiative cooperates with international, regional and local partners, such as the World Food Program, the network of regional food banks, the Emirates Food Bank, the United Nations High Commissioner for Refugees, and charitable, humanitarian and social work associations in the countries covered by the initiative, in order to deepen the positive impact. To take the initiative and expand the circle of people it connects to with assistance, aid and human solidarity.