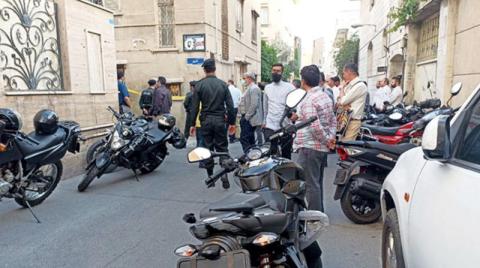 In a rare assassination, a commander with the rank of colonel in the “Quds Force”, the foreign arm of the Iranian “Revolutionary Guard”, was killed by unidentified gunmen who threw his car in front of the door of his house in the east of the capital, Tehran, according to Iranian official media that circulated a photo of him taken moments after the assassination. his death.

The official IRNA news agency said that two people on a motorbike shot Colonel Sayyad Khudaei, who it described as one of the “Haram’s cannons”, at 4:00 pm yesterday, while he was on his way back to his home on Mujahideen Islam Street, indicating that he was hit by five bullets. In turn, the Guard’s “Tasnim” agency said that Khadaei “was assassinated while he was in his car in front of his house.” “His wife was the first to find his body,” the agency said.

The name “Defenders of the Sanctuary” in Iran refers to the members of the “Guard” who carry out military and intelligence tasks under the banner of its foreign arm, the “Quds Force” in Syria and Iraq. Iranian media circulated a photo taken moments after his death.

Later yesterday, the IRGC said in an official statement that Colonel Sayyad Khudaei was targeted with a “terrorist operation”, accusing what he called “elements linked to global arrogance” of being behind it.

The assassination came shortly after the IRGC’s intelligence service announced the discovery and arrest of members of an Israeli intelligence network, according to the state-run ISNA news agency. The IRGC’s public relations service said in a statement: “At the direction of the intelligence service of the Zionist regime, the network tried to steal and destroy personal and public property, kidnapping and extract fabricated confessions.” ».
.

American actress Melinda Ruth Dillon, known for her role in the films “Close Encounters of…