Saudi stress on cooperation to revive the global economy 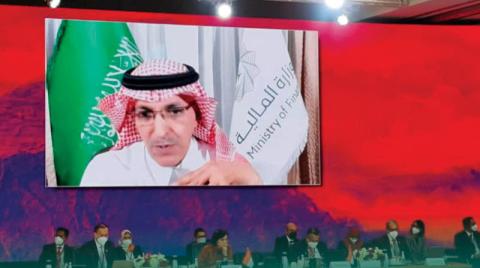 Yesterday, Saudi Finance Minister Mohammed Al-Jadaan stressed the importance of international cooperation to support global economic recovery and prevent negative repercussions under the current circumstances. During his participation in the second meeting of finance ministers and central bank governors of the “Group of Twenty” in Washington, he revealed Saudi Arabia’s continuous efforts to support people and countries in need, including its recent provision of $10 million in urgent support to Ukrainian refugees in neighboring countries.

In turn, the Governor of the Saudi Central Bank, Fahd Al-Mubarak, stressed, in the meeting held on the sidelines of the Spring Meetings of the International Monetary Fund and the World Bank, the need to provide flexibility for different national circumstances and priorities, and the need to build on previous efforts, especially through the use of an approach The carbon economy, which was adopted at the “Riyadh Summit” during its presidency of the “Group of Twenty” in 2020.

The meeting discussed key issues related to significant changes in the global economic outlook, including the necessary economic and financial implications for Ukraine, the epidemic prevention, preparedness and response mechanism, as well as ongoing efforts to maximize the impact of the SDR directive.

The meeting was held in the presence of finance ministers and central bank governors from the “Group of Twenty” countries, a number of representatives of the invited countries and heads of international and regional organizations.
.