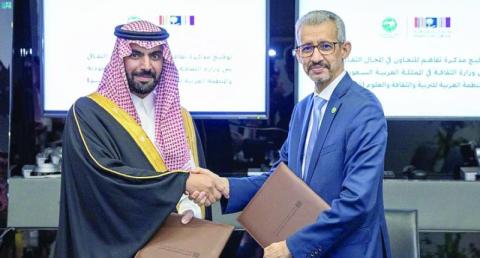 The Kingdom of Saudi Arabia launched the “Culture and the Green Future” initiative, which aims to enhance the role of culture and raise awareness of the centrality of culture in comprehensive and sustainable development. Adapting to it, and dealing with its various challenges.
The initiative was launched by Prince Badr bin Abdullah bin Farhan, the Saudi Minister of Culture, in cooperation with the “Arab Organization for Education, Culture and Science” (ALECSO), on the sidelines of the activities of the Conference of Ministers Responsible for Cultural Affairs in the Arab World, in its 26th session, hosted by the Saudi Ministry of Culture, in cooperation With ALECSO in Riyadh, in the presence of ministers and officials from 20 Arab countries as well as the League of Arab States, and representatives of international and regional organizations.
In a speech he delivered during the conference, the Saudi minister said: “The issue of culture and a green future comes in line with the objectives of (Saudi Vision 2030). Hence, the Kingdom supports collective efforts to enhance knowledge, skills and practices related to making the cultural sector more sustainable and environmentally friendly.
It will focus on the role of culture in shaping the green future, and implementing the commitments of Arab countries to employ culture for sustainable development, through the launch of the “Culture and Sustainability Report in the Arab World”, which will include five axes: the first is the theme of culture and sustainable development, “relying on the power of culture to promote the future.” Green”, which is concerned with consolidating the role of culture in spreading a people-centered approach, and how to support an integrated process for drawing up policies to deal with the repercussions of climate change, based on the power and influence of culture. The second axis also sheds light on the transfer of knowledge and the exchange of experiences to create a green future, and focuses on the processes of coordinating efforts between Arab countries in order to transfer knowledge and exchange experiences to create a green future, while the third axis deals with “climate change and local cultural policies” through progress in the commitments of countries. Arab League is committed to international sustainability efforts, and to highlight the region’s contribution to efforts to protect the planet by including the issue of dealing with climate change within local and regional cultural policies.
As for the fourth axis, “Green Heritage… for a healthy environment and sustainable development”, it discusses the crystallization of an innovative concept, which is “green heritage”, which goes beyond what is termed today as “natural heritage” or environmental heritage to include all initiatives that would Preserving and developing the cultural and natural heritage by focusing on the exploitation of natural resources and raw materials in various fields of cultural heritage.
The fifth axis, “Sustainable and Creative Cities and Cultural Solutions to Ensure Sustainability,” discusses employing the power of culture as a strategic element for more inclusive, creative, and sustainable cities.
In a related context, the Saudi Ministry of Culture and the Arab Organization for Education, Culture and Science (ALECSO) concluded a memorandum of understanding to enhance cultural cooperation through various items, which included cooperation in registering natural sites and tangible and intangible heritage elements in the UNESCO lists, in addition to cooperation In the development of various cultural fields, the Ministry also concluded a memorandum of understanding between it and ISESCO to enhance cultural cooperation in various cultural fields. Museums, visual arts, architecture, design, Islamic motifs, literature, translation, publishing, and libraries, in addition to cooperation in supporting the Arabic language and enabling its international presence.
This came within the meeting of Prince Badr bin Abdullah bin Farhan, the Saudi Minister of Culture, in Riyadh, yesterday (Wednesday), the Director General of ALECSO, Dr. Mohamed Ould Amar, and Dr. Salem bin Mohamed Al Malik, the Director General of the Islamic World Educational, Scientific and Cultural Organization (ISESCO). , each separately, on the sidelines of the twenty-third session of the Conference of Ministers Responsible for Cultural Affairs in the Arab World, which was organized yesterday, in the capital, Riyadh.