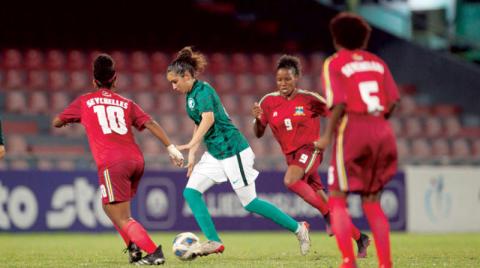 In a new step to confirm its presence on the women’s football map (internationally), the Saudi Football Association announced its intention to run to host the 2026 Asian Cup for Women for the first time in the Kingdom’s history.

Yasser Al-Mashal, head of the Game Association, confirmed that the step comes in light of the generous support of the Saudi government, and the continued interest of the Minister of Sports Prince Abdulaziz Al-Faisal, to compete to host major sporting events. He said in statements, notably the official website of the Football Association, that the desire to host the tournament comes from the premise of achieving new leaps in the field of women’s football in the Kingdom, which witnessed its launch in recent months despite its recent era.

Asharq Al-Awsat learned, through its own sources, that this edition of the tournament will be the largest ever, with the participation of nearly 16 women’s teams.

The AFC said that 3 national federations, besides the “Saudi”, had expressed their desire to host, which are the “Australian”, “Jordanian” and “Uzbek”, and that the host would be announced during 2023.

In parallel, the Saudi Football Association, represented by the Women’s Committee (officially), addressed the professional league clubs to prepare women’s teams during the coming period, in preparation for the Saudi Professional League for Women, whose launch date will be set at a later time after preparing all arrangements at the level of Clubs and stadiums that will host matches and training grounds.

And last season witnessed the establishment of the first Saudi women’s football league (amateur), away from the “professional clubs”. 16 teams participated in it and its matches took place in 3 cities.