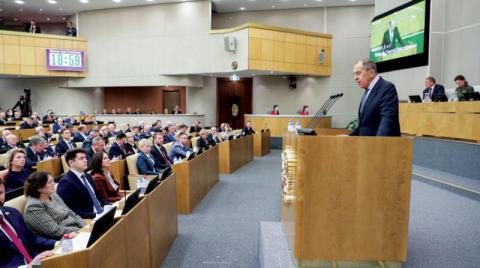 It launched a “transitional phase” to address the “annexation” areas.

The Kremlin tried, on Monday, to ease the impetus of Russian politicians and parliamentarians, who recently emphasized the use of nuclear weapons to resolve the battle in Ukraine.

Kremlin spokesman Dmitry Peskov said that “the use of nuclear weapons will only be in accordance with the terms of the nuclear doctrine,” noting that this doctrine provides for the possibility of Russia preemptively using nuclear weapons; In response to a direct threat to its national security, sovereignty and territory. This principle indicates that nuclear weapons cannot be used in confrontations outside Russian territory, but it maintains the possibility of its use if Russian forces are seriously threatened in the newly annexed areas.

Concurrently, on Monday, Russian lawmakers unanimously approved a law to annex 4 Ukrainian regions, in a move condemned by Kyiv and its Western allies. The Federation Council (Senate) is supposed to ratify today, Tuesday, a step that is considered final for the entry into force of the annexation decisions.

Yesterday, Moscow also officially published the full texts of the treaties annexing four new regions to the Russian entity, namely Donetsk, Lugansk, Kherson and Zaporozhye. The documents stipulate entering into a transitional phase that will last until January 1, 2026, during which the integration of regions will be processed, especially the administrative borders of the Kherson and Zaporozhye regions.

In a related context, Chechen President Ramzan Kadyrov announced on Monday that three of his teenage sons will join the fight in Ukraine. Kadyrov said that his sons, Ahmed, Eli and Adam (ages 16, 15 and 14, respectively), had been receiving military training for a “long time…” and it was time (for them) to appear in a real fight… They would soon go to the front line. In the most difficult areas.
.