Kim: Our nuclear weapon is not only for deterrence 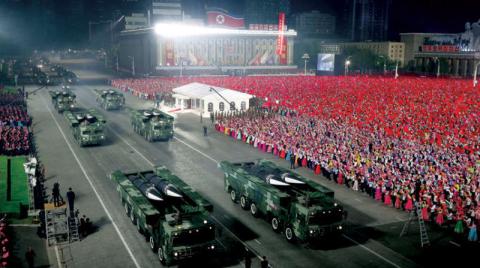 He vowed to use it if North Korea encounters “unfavorable circumstances”.

North Korean leader Kim Jong-un pledged yesterday to “strengthen” his country’s nuclear arsenal, which he said will not only be deterrence, in a speech while attending a military parade in Pyongyang that included intercontinental missiles.

Wearing a white military uniform embroidered with a golden brocade ribbon, Kim supervised the passage of tanks, missile platforms, and the largest intercontinental ballistic missiles, in the military parade held on the occasion of the 90th anniversary of the founding of the Korean People’s Revolutionary Army in Kim Il-Sung Square in Pyongyang, according to official media. .

“We will continue at the fastest pace to take steps to enhance and develop our country’s nuclear capabilities,” Kim said in the speech broadcast on state television. “Nuclear power, the symbol of our national strength and the core of our military power, should be strengthened in terms of quality and size,” he added.

Kim declined to limit the “main mission” of North Korean nuclear weapons to “deterrence only,” noting that “if other countries impose undesirable conditions, our nuclear power will have no other choice but to complete its second mission.”

Last month, Pyongyang tested an intercontinental ballistic missile for the first time since 2017, and satellite images showed indications of activity at a nuclear test site, which North Korea announced its destruction in 2018, ahead of the first summit between Trump and Kim. Analysts believed that Kim’s speech regarding the mission of his nuclear weapons might be a message to the newly elected president of South Korea, conservative Yoon Suk-yeol, who will take office on May 10. The team “threatened a pre-emptive strike against Pyongyang if necessary, and it seems that Kim is saying indirectly that he may have to respond with nuclear methods.”

The white military uniform with the insignia of the Marshall, North Korea’s highest military rank, is also a message to Seoul, according to Chung Seong-chan of the Sejong Institute. He said that symbolizes his “very strong stance towards the prospective Yoon Seok-yeol administration.”

Television footage showed rows of soldiers carrying flags and weapons marching in formations in the lit square. Meditating his generals, Kim smiled and saluted the soldiers while the North Korean planes were flying in formations at low altitude, before the missiles, from short-range ballistic missiles to hypersonic ones, passed on carriers that passed in the square, according to the video scenes.

The display included the most advanced weapons, including intercontinental ballistic missiles, especially hypersonic missiles, and the “Hwasong-17” missile, which North Korea says it successfully tested on March 24. 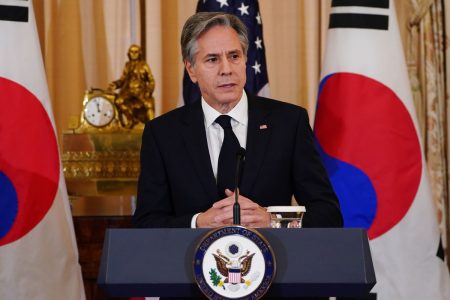