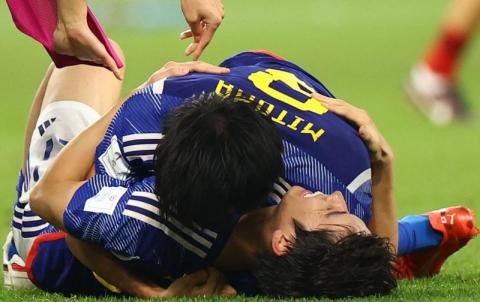 The Japanese national team snatched a pass to the round of 16 in the “2022 World Cup” in Qatar, thanks to its exciting victory over its Spanish counterpart 1/2 in the last round of Group E matches.
Spain won the second qualification card for Group E.
The Spanish national team took the lead with an early goal through Atletico Madrid striker Alvaro Morata in the 12th minute, but substitute Ritsu Doan, the German Freiburg player, equalized for the Japanese samurai in the 48th minute, and three minutes later Oh Tanaka, the German “Fortuna Dusseldorf” player, scored the goal. The second for Japan.
Morata succeeded in scoring during the first 3 matches in the group stage, becoming the first Spanish player to achieve this feat, since Telmo Zara in the “World Cup 1950”.
The Japanese national team began its World Cup campaign with a surprising 1/2 victory over Germany, then lost in the second match against Costa Rica with a goal without a response, while the Spain national team began its career with a landslide victory over Costa Rica with 7 goals for free, then tied in the second round with Germany with a goal for the same.
The match began with offensive attempts by the Spanish matador; Hoping to score an early goal that brings him closer to victory and qualifying.
The first signs of danger came with the advent of the eighth minute, when the Japanese Junya Ito hit a powerful ball from inside the penalty area, but it hit the net from the outside.
The Spanish national team launched its first attack on the Japanese goal in the tenth minute through Alvaro Morata, who received a pass inside the penalty area and met the ball with his head, but it arrived easily in the arms of Japanese goalkeeper Shuichi Gonda.
Spain advanced with a goal in the 12th minute through Morata, after he raised his head directly in front of the goal to an elaborate pass sent by Cesar Azpilicueta, announcing his third goal in the World Cup.
The goal gave a dose of confidence to the Spanish team, as it completely dominated the course of the game, amidst the suffering of the Japanese samurai in extracting the ball.
Murata was close to scoring the second goal for himself and his country in the 23rd minute, with a powerful shot from inside the penalty area, but Japanese goalkeeper Gonda stopped him on the lookout.
The match was suspended for some time as a result of the injury of Spaniard Sergio Busquets, after a strong intervention from Daizen Maeda.
The referee famously issued the first yellow card in the match, to the Japanese, Ko Itakura, for interfering roughly with a player from the opposing team, then the referee returned and warned the Japanese, Shugo Taniguchi, to interfere strongly with Jaffe.
The rhythm of the game decreased a lot in the last minutes, without any real chances on the two goals, so the first half ended with the Matadors excelling with a goal without a response.
With the start of the second half, Japan coach Hajime Moriyasu made two changes, with Ritsu Doan and Kaoru Mitoma replacing Takefusa Kubo and Yuto Nagatomo, while Luis Enrique, Spain coach, pushed Danny Carvajal instead of Cesar Azpilicueta.
And just 3 minutes after the start of the second half, the Japanese national team equalized through substitute Ritsu Doan, after Junya Ito took advantage of the confusion in Spain’s defenses, snatched the ball and passed it to Doan, who hit a powerful ball that found its way into the net of goalkeeper Yonai Simon.
After another 3 minutes, the Japanese samurai scored his second goal through Oh Tanaka, after Kaoru Mitoma received a creeping pass inside the penalty area, to pass in turn to Tanaka to shoot directly into the Spanish net, and the referee used the “mouse” technique before acknowledging the validity of the goal.
Enrique sought to activate the Matador attack line, as he pushed the duo Marco Asensio and Ferran Torres, instead of Morata and Neco Williams, while Takuma Asano participated in the ranks of Japan, instead of Daizen Maeda.
The Japanese national team succeeded in maintaining its progress, prompting Enrique to make two other changes, with Ansu Fati and Jordi Alba descending, instead of Javi and Alejandro Balde, and the Japan coach made his fourth change by descending Takehiro Tomiyasu, instead of Daichi Kamada.
Takuma Asano almost snatched Japan’s third goal in the 70th minute, unawares of the Spanish defense, as he received a cross creeping into the penalty area without any control, but he shot improperly outside the net.
Spain imposed complete control over the course of the game, hoping to snatch the equalizer, but it was met with defensive bravado on the part of its Japanese opponent.
One minute before the end, Marco Asensio almost equalized for Spain with a powerful shot from the edge of the penalty area, but the Japanese goalkeeper saved the ball brilliantly.
In the last minute of the match, a new opportunity was missed for the Spanish Matador, after Japanese goalkeeper Gonda saved a powerful shot from Dani Olmo.
Spain missed opportunities in stoppage time, amid the defensive bravado of Japan’s players, and the match ended with Japan’s victory over Spain 1/2.

The essentials in brief: Kyiv speaks of the highest daily loss for Russia Next martial…