Germany thwarts a coup attempt by the extreme right 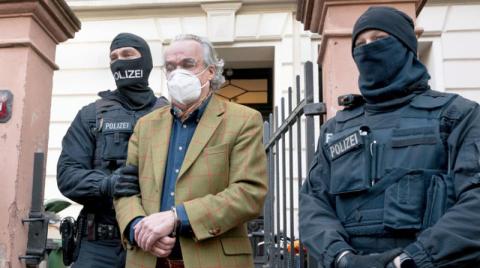 Yesterday, Wednesday, the German authorities thwarted one of the largest terrorist plans prepared by an extreme right-wing group, to overthrow the state and launch an armed attack on the Bundestag building (the Federal Parliament) and install its government.

German police arrested 25 people in the extremist network who were preparing a coup against power, according to the federal prosecutor, out of 52 suspects. Among the detainees is a man with Russian citizenship named Vitalia B. Help the leader of the group to communicate with the Russian officials.

Nearly 3,000 policemen from the special units carried out raids in 11 states, and two arrests took place outside Germany, in the Kitzbühel region in Austria and another in Perugia, Italy, in coordination with the authorities in both countries.

The group includes a judge who was a former lawmaker from the far-right Alternative for Germany party, and a group of ex-soldiers.

Prosecutors accuse the leader of this group, Heinrich XIII Reuss (71 years old) and bearing the title of Prince, of trying to communicate with Russian officials through the Russian embassy in Berlin. Immediately, the Russian embassy issued a statement denying any connection with the group.

As Kremlin spokesman Dmitry Peskov said, “There is no room for talk of Russian interference here.”

The group, which was formed in November 2021, was planning an armed operation targeting the Bundestag headquarters in Berlin, to be carried out by former army soldiers. After carrying out the military operation and overthrowing the government, the group was planning to put in place its government that it had previously formed.

The members of the group belong mainly to an extreme right-wing group, the “Reich Citizens”, which refuses to recognize German laws and state sovereignty.
.