France takes back 47 women and children from Syria 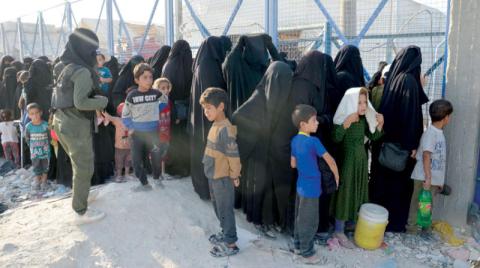 The third batch of ISIS families residing in Al-Roj camp

Yesterday (Tuesday), France recovered 47 women and children from families of ISIS members in Roj camp, northeastern Syria. This is a result of the successive pressures on the French government at home and abroad, the latest of which was the condemnation issued against it last week by the United Nations Committee against Torture.

The aforementioned prison and other detention centers, most notably the “Al-Hol” camp, are run by the “Syrian Democratic Forces” and the local Kurdish administration.

The French Foreign Ministry, which supervised the operation, said in a statement yesterday that Paris “carried out a new operation by which it returned to the national territory French children and their mothers who were being held in camps in northeastern Syria.”

The statement added that the aforementioned operation provided the return of 32 minors and 15 adult women, and that the minors were handed over to the agencies charged with helping children and will benefit from medical and social follow-up, while the women were handed over to the competent judicial agencies. At the end of the statement, France expressed its thanks to the local administration in northeastern Syria, which facilitated the deportation process.

Subsequently, the Anti-Terrorism Public Prosecution issued a statement stating that eight women, against whom search and investigation warrants had previously been issued, were arrested, while the remaining seven women will appear before the investigative judges of the Anti-Terrorism Unit, after the aforementioned Public Prosecution issued arrest warrants against them since their arrival on French soil. .

Thus, the authorities have separated mothers from their children, as they have been doing since the first operation of this kind that took place in July of last year.

The latest operation is the third of its kind; It was preceded by a similar operation in the fall of 2021, when France returned 15 women and 40 children, and another last July, during which 16 women and 35 children were recovered.
.