Exchange of two prisoners between Washington and Moscow 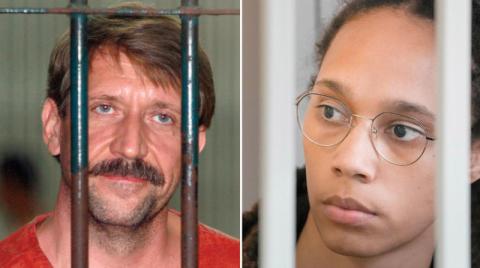 The exchange of two prisoners between the United States and Russia succeeded, after Saudi-Emirati mediation facilitated the completion of the deal. Under this deal, pictures of American basketball star Brittney Greiner’s arrival to her country appeared, after the Russian authorities released her, as part of an exchange that included Russian arms dealer Victor Bout.

A joint statement by the foreign ministries of Saudi Arabia and the UAE confirmed the success of the mediation of the Emirati President, Sheikh Mohammed bin Zayed Al Nahyan, and the Crown Prince and Prime Minister of Saudi Arabia, Prince Mohammed bin Salman, in releasing the two prisoners. The statement stated that Abu Dhabi «received (Wednesday) the American citizen via a private plane coming from Moscow, after the Russian authorities released her, and at the same time a private plane arrived from Washington with the American citizen on board, and the American and Russian sides received their citizens, in preparation for their transfer to their countries And in the presence of specialists from the Saudi and Emirati side ».

In a festive atmosphere, US President Joe Biden delivered a speech next to Vice President Kamala Harris, Secretary of State Anthony Blinken, and the basketball player’s relatives, and said that her release “required arduous and intense negotiations.”

Although the deal was celebrated, the Biden administration has faced criticism for failing to bring back Paul Whelan, a US corporate security executive who has been imprisoned in Russia for four years on espionage charges and sentenced to 16 years in prison.
.