Does gravity cause irritable bowel syndrome? 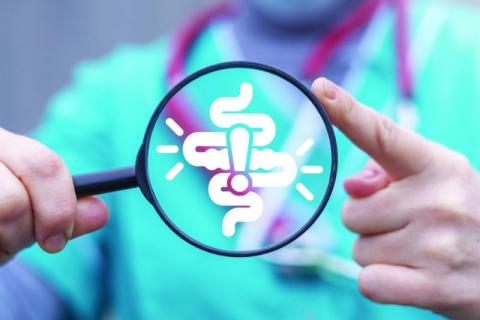 When trying to interpret and explain the mechanisms that cause diseases, the medical community resorts to attributing this, either to a disorder of factors within the body (high blood pressure, a disorder dealing with blood sugar, fat and cholesterol disorders, immune system disorders…), or a defect. Genetic, inherited or acquired (cancer tumors, etc.), or factors from the human environment (microbes, types of radiation, heat variation, metal poisoning, exposure to pollution…), or behavioral factors (smoking, lack of sleep, lack of exercise, excessive eating Health eating disorders…).

Unfamiliar hypotheses
The medical community does not find in this approach an explanation for a number of other diseases and physical and psychological disorders. Therefore, some researchers are trying to present new and unfamiliar hypotheses and theses, regarding the possible pathological mechanisms for those cases that do not find a convincing explanation for them.
For example, if someone told you that gravity and disorders of the colon are closely related, you might find it hard to believe. However, a recent scientific notion confirms that the unstoppable force of gravity that we live with throughout our lives by adapting our bodies to manage dealing with it is currently acting on the colon, and may cause great suffering to some individuals with IBS.
In a new scientific article, gastroenterologist Dr. Brennan Spiegel of Cedars-Sinai Hospital in Los Angeles offers the unusual thesis that irritable bowel syndrome results from the body’s inability to efficiently manage gravity. He explained that our intestines are like a large bag of potatoes that we have to carry throughout our lives, and whose weight and anatomical connections inside the abdomen require adaptation and management by the body to control the effects of gravity on it.
And according to what was published in the current December issue of The American Journal of Gastroenterology, Dr. Spiegel put the phrase “Gravity and the intestine … the irritable bowel syndrome hypothesis” as the title of his scientific review.
He said in the introduction to his presentation: “Irritable bowel syndrome (IBS) affects up to 10 percent of the world’s population, and the mechanism of causing the emergence and development of this disease is still unknown today.”

IBS
Medically, it is widely believed that Irritable Bowel Syndrome is a disorder of the interaction between the gut and the brain, where there is a strong overlap with the accompanying psychological diseases, with evidence that the use of neuromodulators and the use of brain – gut behavioral therapies are indeed effective in patients. Some patients.
Another theory says that Irritable Bowel Syndrome occurs as a result of an imbalance in the gut microbiome, as evidenced by the excessive growth of colonies of friendly bacteria in the gut microbiome, which is widespread among sufferers. Therefore, the clinical response to therapies aimed at rebalancing these microbiome – Targeted Therapies is clear.
Others postulate that bowel movement disorders, visceral hypersensitivity of the abdominal organs, abnormal levels of serotonin (a neurotransmitter that regulates bowel movement), or autonomic nervous system disorders cause irritable bowel syndrome.
In addition to the complexity of explaining the pathogenesis, IBS is associated with a wide range of conditions, including fibromyalgia, JHS, low back pain, and diverticulosis (small sacs that form in the walls of the joints). colon), postural tachycardia syndrome (POTS), headache, and dizziness.
Therefore, Dr. Spiegel added a summary of the current medical bewilderment regarding understanding irritable bowel syndrome and dealing with it, saying: “It is puzzling that a pathological disorder that is prevalent (and widespread) among humans, is (even today) explained through theories that differ from each other, and that the response to treatments (available get) has vastly different mechanisms of action, and that this pathological disorder is accompanied by a dizzying array of (conditions) and comorbidities. It is reasonable to ask whether there is a unifying factor linking these disparate theories and observations, and if so, what is this factor?
It should be noted that the medical community uses two terms when naming pathological conditions or disorders, one is “syndrome” and the other is “disease”. For example, in the case of ulcerative colitis, inflammatory bowel disease, the condition is called a “disease” because symptoms and signs such as diarrhea, fever, bloody stools, and weight loss are all logically related to pathological changes in the colon. While in the “syndrome” the patient exhibits a set of symptoms and pathological signs, without the possibility of linking them to one specific pathological mechanism. Which is exactly what happens in irritable bowel syndrome.
Spiegel’s recent scientific review presents a hypothesis he describes as “testable” and “seeks to accommodate” multiple theories, clinical symptoms, comorbidities, neuropsychological features, and IBS treatment outcomes, by describing the syndrome in relation to the main force of evolution. human; gravity”.

Gravity defect
He summarized his new hypothesis by saying what he summarized: “The hypothesis proposed here is that Irritable Bowel Syndrome may result from a defect in the effectiveness of the body’s dealing with gravity systems, from the anatomical, physiological and neuropsychological aspects, which were originally designed to improve the shape and function of the digestive system, and protect safety.” The body and organs are inside the abdomen, and we live in a world that is closely linked and inseparable from earthly gravity.
And he went on to mention that “a defect in dealing with gravity (intolerance to gravity) has mechanical, microbial and neuropsychological consequences that affect the emergence of irritable bowel syndrome. And the effect of gravity on the musculoskeletal system (diaphragm muscles and abdominal wall muscles) could also play a role.
He said: “Our diaphragm (which separates the chest from the abdomen) can fall and put pressure on our intestines, if our body’s natural control of gravity fails for any reason, which may lead to problems with bowel movement and the growth of friendly bacteria in it.” . To clarify, flatulence occurs as a result of a contradiction between the work of the diaphragm muscle and the work of the muscles of the anterior abdominal wall. During this contradiction, a contraction occurs in the diaphragm muscle, which pushes it down into the abdomen, and is accompanied by a relaxation in the muscles of the anterior abdominal wall. The result is the appearance of flatulence without an actual increase in the volume of gases in the abdomen. Evidence that the CT scan of patients with “functional distension” of the abdomen shows these muscular changes with no increase in the volume of intra-abdominal gases.
He offered another demonstration, summing it up: “Our nervous system reacts to gravity, and this may explain why many people feel butterflies in their stomachs when anxious. But it also occurs when the colon is tense and irritated, as well as during a rapid descent on a roller coaster ramp (a miniature railway twisting up and down amusement parks) or during turbulence on an airplane. These feelings could be Gravity – Force Detectors to let us know when we are witnessing, or are about to witness, a physical fall under the influence of Earth’s gravity.
Therefore, irritable bowel syndrome may be more common in people who have a higher physical ability to predict changes in the force of gravity (just as some animals can predict the signs of earthquakes). That is, people with irritable bowel syndrome may be prone to over-predicting (or delusional) the threat of gravitational changes that never occur. He added, in explaining his new hypothesis, that the contents of the abdomen can be heavy, and some bodies can bear the weight of this load easier than others. Weak muscles can cause the bowel to prolapse, or spinal problems can cause the diaphragm to sag, leading to abdominal compression.
To explain the role of musculoskeletal problems in the emergence of Irritable Bowel Syndrome, exercise and physical therapy provide relief when treating Irritable Bowel Syndrome. It is an indication of the possibility that the body’s intolerance to Earth’s gravity is the cause of this disorder in the colon.
Serotonin can also play a role when levels of this neurotransmitter are abnormal, which can cause anxiety, depression, fibromyalgia, chronic fatigue and IBS. “They are all signs and manifestations that could be forms of intolerance to gravity,” he added.

> As a basic and vital principle, living on the earth’s surface requires the organism’s body to deal with the degree of gravity created by the earth, whether that organism is moving on lows or highs on the earth’s surface, flying in the air, or diving under water, and whether the size is very precise, such as microbes , or as large as living or extinct animals.
This interaction is to enable the body’s systems to work efficiently so that the organism lives, moves, rests, activates, and so on, with the continuous presence of the earth’s gravitational force, in order to create the spatial and kinetic environment for everything in the body and improve the existing stability of the body, structural support, movement, fluid dynamics, and nervous integration Psychological, and the position of the organs with each other inside the body cavities.
As bipedal organisms, we live two-thirds of our lives in an upright position, exerting a downward pull on our body. In these conditions the body resists and absorbs the downward pull imposed by gravity.
The body’s systems for dealing with gravity are found within the digestive system, the musculoskeletal system, the vestibular ear, the heart, and the blood vessels. When these systems are not prepared to resist gravity, a mismatch occurs between the expected gravitational force stress against the actual gravitational force on the object. This leads to physiological consequences, in part via the gut microbiome, that lead to stimulation of the peripheral nervous system. This is culminated in the sensations of the central nervous system, in part via serotonin.
If gravity intolerance persists over time, the peripheral nerves that receive sensations become desensitized, eventually leading to sensitization in the central nerves and hypervigilance, to protect the body from the stress of gravity, which is thought by the brain to be outside the realm of bodily and visceral integrity. At the extreme, the brain predicts gravitational force events that do not or may never happen, leading to a form of visceral pain characterized by feelings of turmoil in the gut. This uncorrected sequence results in maladaptive emotions, cognitions and behaviors, originally designed to maximize survival in a gravity-bound world.
In the digestive system, there are several systems to resist the downward force, all of which jointly suspend and order the viscera within the abdominal cavity. Dr. Spiegel hypothesizes that these mechanisms and their effects on GI topography may become dysfunctional, leading to the symptoms of Irritable Bowel Syndrome.
“Under this theory, pathological feelings occur in the gut, such as visceral allodynia, when the brain predicts (perhaps as a delusion or as an analogy) gravitational events that do not happen or may never happen,” he said.