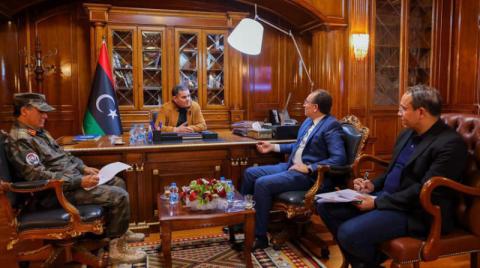 Unofficial sources told Asharq Al-Awsat that Dabaiba tried to persuade the Tunisian authorities to intervene to prevent Bashagha from continuing his military and political meetings that he recently started in Tunisia, noting that Dabaiba met in Tripoli on Saturday evening with the Tunisian ambassador, Al-Asaad Al-Ajili, in the presence of Major General Muhammad Al-Zein, head of the force. anti-terrorism.

In a statement distributed by his office, Dabaiba ignored the reference to these meetings, and said that he had discussed with Al-Ajili “increasing security coordination between the two countries, and the role of the Tunisian embassy in organizing a number of meetings between the technical security services.”

In response to the movements of Bashagha forces towards Tripoli, Dabaiba, who met on Saturday evening, Abdel Wahab al-Hajjam, the mayor of Nalut, issued his instructions to work to establish security and prevent any moves aimed at destabilizing the situation in the western region.

Meanwhile, groups from the people of Zueitina, Ubari and Brega announced the closure of the export and production of oil from the ports and oil fields in these cities, pending the transfer of power to Bashagha, while Field Marshal Khalifa Haftar, commander of the National Army, denied, in the words of Major General Ahmed Al-Mismari, issuing instructions to close all fields and ports oil.

He was famous for his crazy ideas… and his perfumes immortalized his name Yesterday, it…