“Circles of Light” in Riyadh, manifestations of light in plastic art 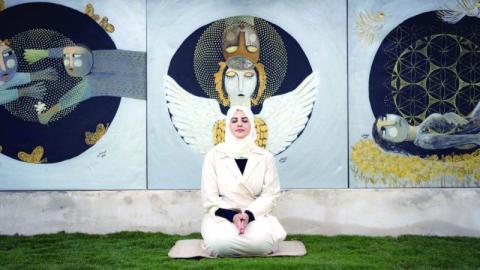 Light is the beginning, and it is the first thing the artist sees when he gets the opportunity of artistic birth, and this element that interferes with the formation of arts of all kinds; It was formed by the Saudi artist, Taghreed Al-Baqshi, in her solo exhibition “Circles of Light”, which opened this week at the Pure Art Gallery in Riyadh, in conjunction with Misk Art Week 2022.

And from the first moment; The question jumps to the audience’s mind: What does the light refer to? Here, Taghreed Al-Baqshi answers, saying: “If the light were a solid matter, we would hold it; Like a ball that we move slowly and then throw it to the top and it falls to roll due to gravity, I would have built mountains out of the light! This wild imagination seems clear in the works of Taghreed Al-Baqshi, from which a glimmer of hidden light radiates.

Taghreed Al-Baqshi explains to Asharq Al-Awsat that during her search for human contact with and around the light; And the ways they deal with the sensory matters surrounding them, I found that the light has several sources, adding: “They are sources around us and from within us, where the light comes in the form of radiant waves through which we explore the outside world, and the reactions accompanying the event (sensual, mental and spiritual) are nothing but Translate the reflection of this light.

Taghreed Al-Baqshi also indicates that there are elements that coincide with several fields, whose waves swim in those circles (light, sound, and image) and then meet to form a “hemograph” called memories, and she adds: “Some of them fade with time, and some of them remain in us, so they are not forgotten.” Indicating that her artistic vision depends on mixing these deep perceptions through plastic paintings. 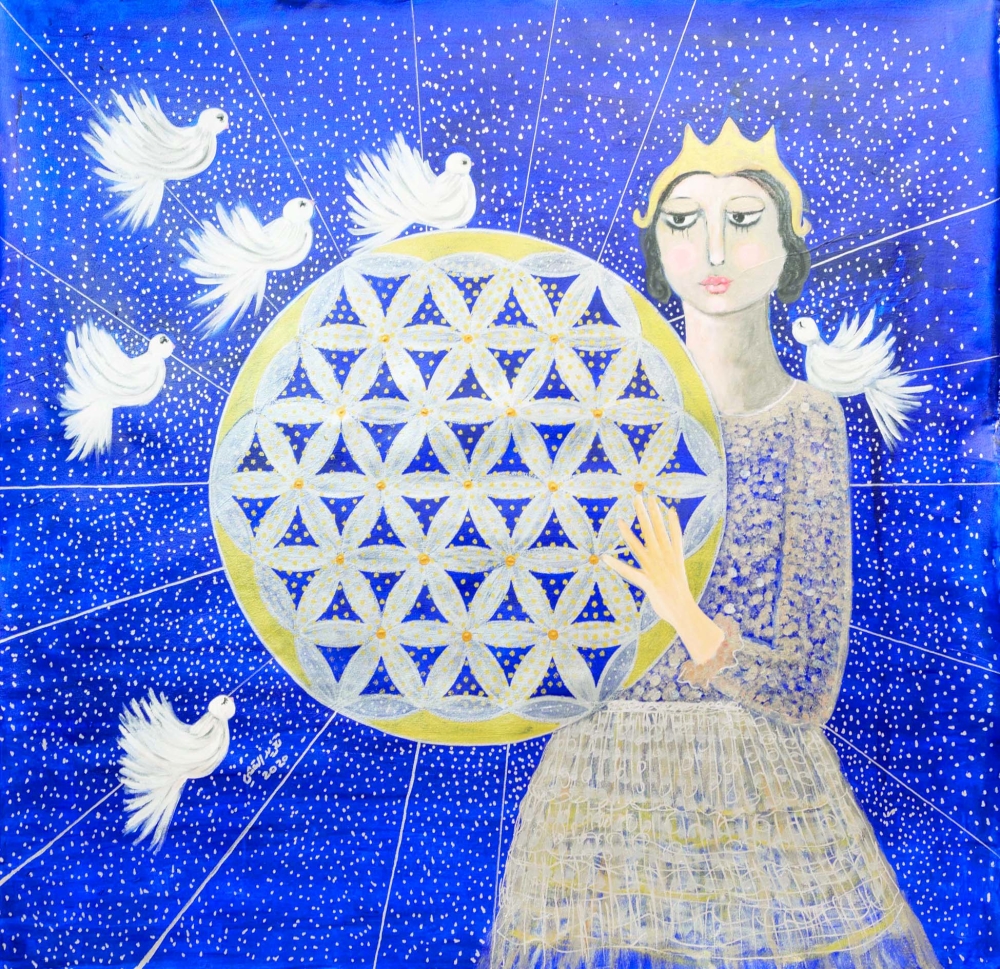 “Circles of Light” exhibition focuses on light in art

The recipient pauses for a long time in front of the female figures in these paintings, at times they appear to be gentle, angelic faces, and at other times they are mysterious and question-provoking. Here, Taghreed Al-Baqshi says: “The characters were depicted with a character that mixes strength, perseverance, and self-possession, which are amazing anti-gravity images and absolute imagination.” As if these figures were floating between two worlds surrounded by circles of radiant light. For Taghreed Al-Baqshi, light is not only a source of inspiration, but rather inspiration itself. She continues: “When I think back to the times when I used to meditate, I see that it depends on my being inside a bubble of light, and that the light comes from the seven layers of the sky and permeates my existence through Aether, to be reflected on the surface of the artwork. 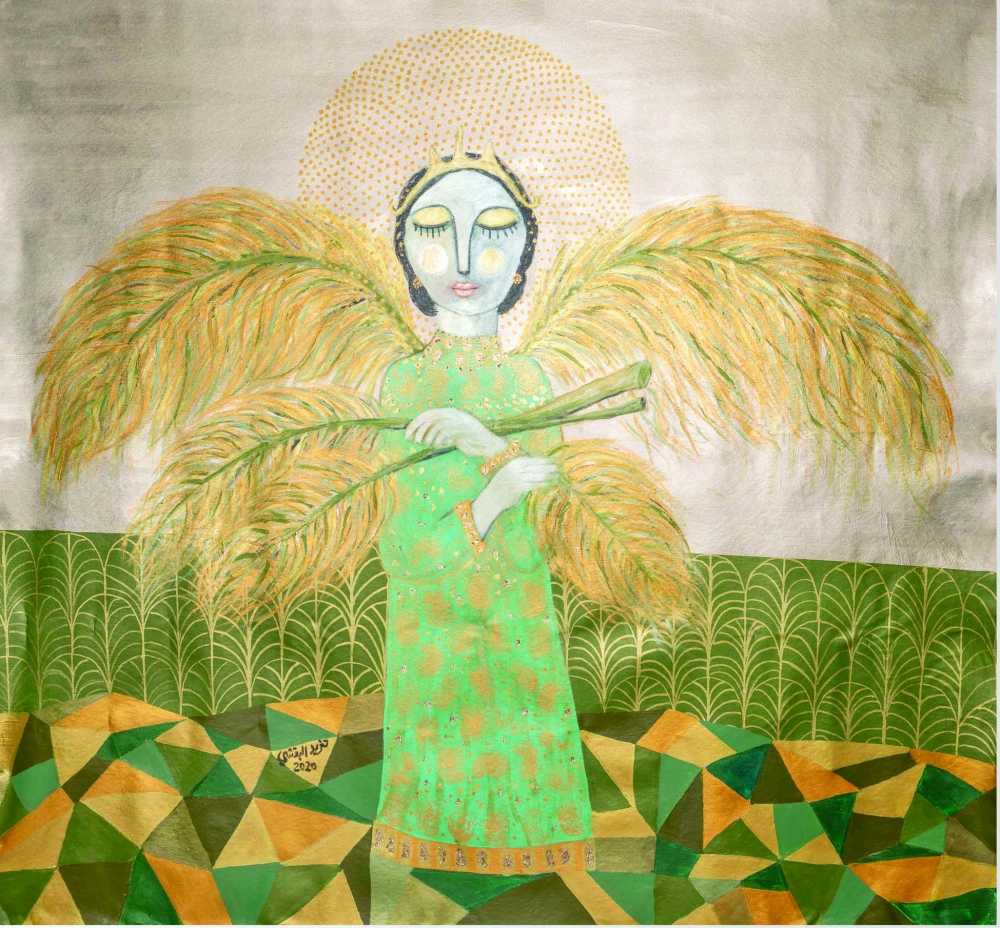 Taghreed Al-Baqshi’s paintings carry many hidden contents, including a painting called “Women’s Empowerment”, in which a woman appears holding a light torch in the manner of the Statue of Liberty in New York, with a palm tree and a book in her other hand, and around her a group of women in work uniforms from different sectors, in A reference to the renaissance of contemporary Saudi women.

In another painting, a girl puts a golden crown on her head, while she is holding a large ball that resembles the globe, as if the whole world is in her hands, and around her is a group of white doves that always refer to peace, in a symbolism that mimics the artist’s vision of the world. The same thing is in another painting, in which two people appear trying to embrace each other, and one of them holds a rose, as if Taghreed Al-Baqshi appeals to humans to coexist and harmonize with each other, given that the drawn ball is the planet Earth.

These paintings express the well-known artistic approach of Taghreed Al-Baqshi, which is considered one of the most important contemporary plastic names in Saudi Arabia, where the well-known artist’s formations appear, from full female faces with wide eyes, and natural formations of pigeons, flowers and some plants, all in the bright color combination. Which the follower entrusted to Taghreed Al-Baqshi’s artistic experience.

It is worth noting that the “Circles of Light” exhibition is being held by the Pure Art Foundation in conjunction with Misk Art Week, and will continue until January 5, 2023. The exhibition includes 33 artworks through which the artist, Taghreed Al-Baqshi, sheds light on personalities in different situations. She represented strength and steadfastness, and whoever contemplates these works may see himself in these characters, or he may see a reflection of their light, as the artist sees.