Artists’ notebooks… from poetry to politics and everything in between 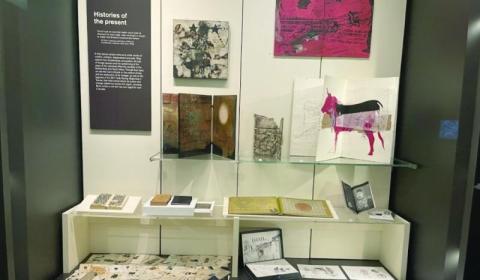 In the Bukhari Hall of Islamic Art in the British Museum, there is a lot of art, antiquities, and artifacts from all over the Islamic world. It transcends time, focusing on art and people.

In addition to all this art and beauty, there is a corner of the hall that is unique in holding small shows that are limited to one topic, such as the exhibition of the history of coffee in the Islamic world that was held last year, and currently the corner has turned to embrace modern and contemporary drawings and poems by Arab artists in a unique exhibition and theme.

Under the title “Artists’ Notebooks… From Poetry to Politics,” Venetia Porter, a specialist in Islamic art and Middle Eastern art at the British Museum, chose to display works by artists from the East and West who used books to express their art, not by writing alone, but by drawing and color. Porter admits that she is a fan of this line of art, which appeared in previous exhibitions curated by the expert, such as “Reflections” at the British Museum, and “Places” in Jeddah this year. She also used to display some notebooks in a side of the Bukhari Hall of Islamic Art, Among the permanent exhibits.

I talk with Porter about the exhibition, which opens a window on a kind of Western art, which Arab artists used to express political opinions mostly, and developed the idea of ​​​​the “artist’s book” Livre d’artist that emanated from France, to become an archive of their own kind, carrying a special intimacy . Porter takes me on a private tour of the exhibition, talking with enthusiasm and love about “artists’ notebooks.” She says that this type of art has always been charming to her. Conflict and destruction of heritage.

She talks about the current exhibition: “Here the exhibits are all from the British Museum collection, and there are about 50 pieces distributed according to the subject. The first section is general. It deals with the idea of ​​notebooks in general, based on its appearance in Paris, and from it we see a book by the artist Andre Deran from 1912, and we move after it to a book from the work of the artist Shafiq Abboud, who is the first Arab artist to enter the midst of notebooks.

She refers to Shafiq Abboud’s notebook, which tells a fictional story, with a lot of magic and symbolism: “This book was made in 1954, and in it the artist used a tale from French folklore about a woman who longs to have children, but she cannot, and she prays to heaven to grant her anything, she says; I want children, even if they are mice. Indeed, thousands of mice give birth, and her husband kills the mice, except for one. She showers him with her love and spins hats for him.

The book in front of us is open on two pages, so we see a wonderful drawing that depicts a woman, and on the opposite page are different words and drawings. I ask Porter if the exhibits are otherwise available for the public to see in their entirety. 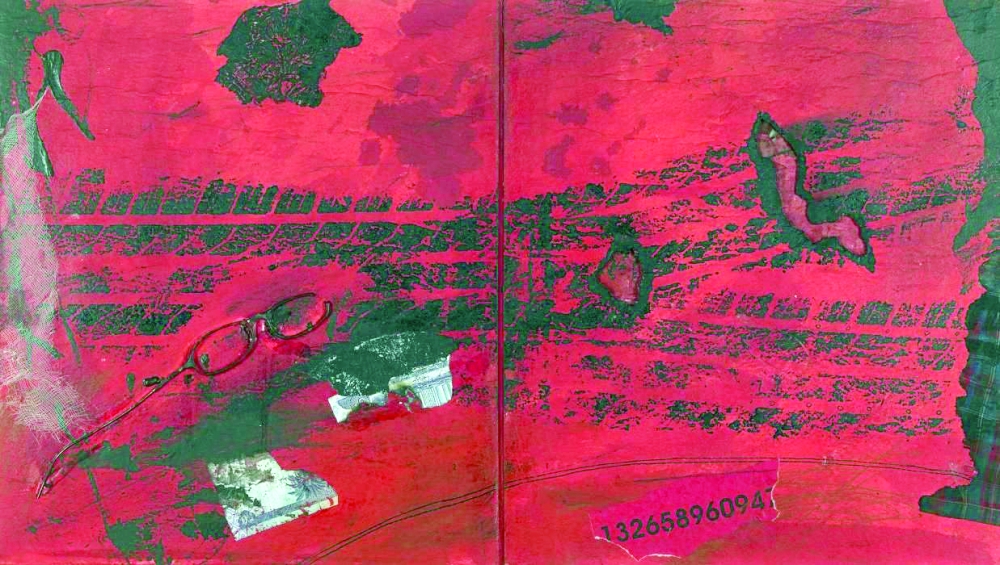 From the work of the artist Karim Risan (British Museum)

There are also notebooks from the work of the artist Dia Al-Azzawi, who started making notebooks under the influence of the French artist Henri Matisse, and remember here that Iraqi artists have a special connection to this type of art.

The art of notebooks between the personal and the public

At this point I ask her; Are the artists making these books for themselves or for the public? She answers, saying: “This is an important question, because many artists make these notebooks in addition to their other works, such as Diaa Al-Azzawi, who made his book by braiding his drawings with Adonis poetry, but he also paints paintings and creates sculptures. I think they make notebooks for themselves in a sense, but they also They see the commercial value of it.” The answer makes me wonder; Do artists show these notebooks to the public? The expert’s answer comes in the negative, and she continues: “This is another important question, although the notebooks represent an independent artistic genre, as a European heritage, and were not taken into account greatly in the past, but the public has now begun to pay more attention to them, and for this reason the artist Abdel Qader (who is keen very kind) by presenting a distinguished exhibition last year in Florence; Where he commissioned a number of artists to make the notebooks, and the artist Diaa Al-Azzawi will present them in his exhibition at the Ashmolett Museum in Oxford next week.

Poetry is present and hidden

Referring to another notebook by artist Fadi Yaziji, Porter goes on to show her and says: “This book includes poems by the Lebanese judge Tamer Mallat, who lived during the Ottoman era in the early twentieth century. Fadi Yazigi took the book and drew on its pages.

Are the graphics related to the poems? ask her. And she answers: “In this case, no. The artist uses the book as a canvas for his drawings. The relationship between the text and the drawings is generally an interesting matter. In some cases, artists used books as a canvas for their drawings. In the example of Azzawi, we see how he dealt with Adonis’ words and responded to them, which gives us a sense of The two work together harmoniously. In the show, we pass a book of huge pieces, in which we notice a picture of the late Queen Elizabeth II in her youth. Porter explains: “This book was issued by Tashin House on the occasion of the diamond jubilee of the late queen, and 3 Iranian artists drew on its pages in a creative and funny way.”

Porter talks about notebooks with a poetic chant: “These books are very beautiful. When we hold them and feel the texture of the paper and look at the drawings and words, whether by hand or printed, and we contemplate the way the writing is arranged and its position on the page, we find it very wonderful. I come back to your question; Do they make books for themselves? I think they make them for themselves, and this is what reaches us. We feel the pleasure that the artist felt when drawing them. I feel that we are peeking into these books, as if we are intruding on others.

We turn to the second cabinet, which is dedicated to the artist Rashid Qureshi, and is titled “Child (Jazz) and War.” Here we see a longitudinal painting consisting of transverse strips of drawings, followed by words that say; The poems are by Mohamed Dib, the Algerian poet who lived in exile in France: “Rashid translated the text from French into Arabic. We see Rashid’s drawings that we are familiar with. They are lettering, and also from the world of magic, revolving around Algeria during the civil war.” Below the painting we see a group of bound books, two of which are opened on specific pages written in beautiful Arabic script, and it says: “These books revolve around 7 monks who were killed by extremists. Each book bears the name of a monk, and each book carries a text by a specific writer. Here I left the book open.” On a very beautiful text by British writer John Berger… For me, these books present deep stories in a beautiful, non-aggressive manner, which makes them very impressive.

For Middle Eastern artists, inspiration comes from the Persian medieval poets Jalal al-Din al-Rumi and Hafez, or the tales of One Thousand and One Nights (such as the work of the artist Naja Mahdawi in a subsequent cabinet), or the works of the Arab poets Adonis and Mahmoud Darwish. All these poets are here before us, along with the drawings and lines of different artists. We see another notebook by Shafiq Abboud, in which he collaborated with Adonis, then we see The Book of Cities by Ziad Dalloul: “He and Adonis chose cities, Marrakesh, New York, Petra, and others.” Then we see a book by Adonis that he drew himself.

A small book, in which nails were thrown to cover the writings, is unique. The book is by Khalil Rabah, and was previously shown at the “Word in Art” exhibition in 2006: “We cannot imagine how difficult it is to stick nails into paper. Paper is very difficult. People may not notice it. The book gives us a sense of power.”

While the Iraqi artist Karim Raisan (b. 1960) sheds light on the horrific effects of the deadly explosion in the streets of Baghdad in 2005, for the Indian artist Nalini Malani (b. 1946), she was influenced by her experience as a refugee from the partition of India in 1947.

In this small but powerful show, works by artists from New York to Damascus and beyond shed light on the relationship between artists and poets, and the influences that carry their work, from family to politics, and everything in between. And while I feel myself like a voyeur on the pages of the artists’ private and intimate diaries, I leave the exhibition with questions, fantasies, and a sense of the beauty of books, whether written or illustrated, in my head.