An experimental drug that misleads “Covid” … and destroys it 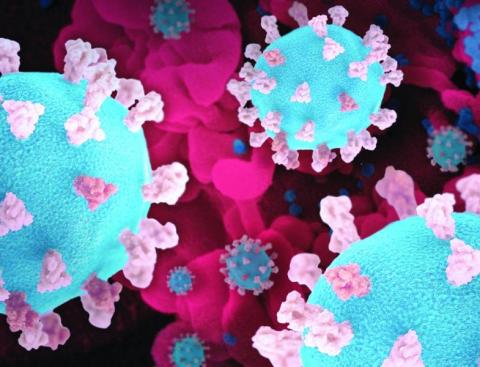 The Corona virus is a changing enemy with its new mutants, and its sub-mutants that are rapidly evolving to be able to evade vaccines and treatments. Researchers from the Dana-Farber Cancer Institute in Boston are currently working on developing an experimental drug capable of overcoming one of the virus’s strongest traits – its ability to mutate – and using it against it.

dummy receptors
When the coronavirus attaches itself to a specific type of receptor (receptor) on the surface of a cell, it pushes its spike protein inward like an automatic knife, and infection begins.
The new drug is designed to mimic this future, and to act as an attractive killer in disguise. When the coronavirus tries to latch on to it instead of the real receptor, this deceptive receptor destroys the structure of the spike protein and permanently disables the automatic knife-like mechanism, according to a report published in the journal Science Advances on December 6.
This approach corners the coronavirus: If the virus develops a self-protective mutation that allows it to latch on less effectively to the decoy drug, the decline in this effectiveness will also apply when the virus tries to latch on to human cells.
The virus has previously succeeded in circumventing antibody therapies by developing new versions of its spike protein. But to get around this rogue drug, he’ll have to look for and stick to a completely different future — but the very slim likelihood of that possibility would require “completely radical changes” in the virus, explains Gordon Freeman, an immunologist at the Dana-Farber Center and Harvard Medical School. , and one of the study’s researchers.
For his part, Dr. James Torchia, a clinical fellow at the Dana-Farber Center and Harvard Medical School and the lead researcher in the study, said, “We do not seek to fight the evolution of the virus, but rather to design this drug in a way that pushes it to this development,” that is, the development that leads to a decrease in its effectiveness.

Tricky drug
The receptor the researchers are working on is called angiotensin-converting enzyme 2, or ACE2, and the drug relies on a deceptive ACE2 receptor. At this stage of research, the drug is known as “DF-COV-01” and its testing is still limited to animals.
Experiments conducted on hamsters, a type of rodent infected with the coronavirus, showed that animals that did not receive treatment lost about 10 percent of their weight (an indicator that measures the risk of infection) in the first five days. On the other hand, it was found that the samples that received the treatment lost less weight than the others, so that they regained the weight that they lost more quickly later on. It also appeared that the animals that received the treatment carried less virus in the lungs.
John Wang, a professor of medicinal chemistry at Rutgers University, considered that “several research groups have sought to develop a strategy based on deploying a decoy trap to disrupt infection with the (SARS-Cove-2) virus.” It is true that the idea is simple, but the devil is in the details. To date, no one has succeeded in developing a treatment for (Covid-19) using this technology.
Deceptive medicines cannot be made in the form of pills that the patient takes at home, because they are made of proteins and will not last long in the digestive system. For this reason, patients must be given it by injection or intravenously.
But Wang said that “this research has made great progress in the possibility of using this type of treatment” after the researchers made changes in the decoy molecule so that it could last for up to 52 hours in the body of rodents. If the same attempt works in humans, the experimental treatment could be given to the patient once every two days instead of the daily dose.
Wang noted that this “will be an added benefit from the patients’ perspective.” But it is not yet clear whether the improvement in animals will apply to humans as well.
Dr. Paul Insel, a pharmacologist from the University of California, San Diego, who supported the potential for a bogus version of ACE2 as a treatment for COVID-19 at the start of the pandemic, said he was excited when he started reading the new paper. But his hopes were dashed when he looked at the results.
“As long as the paper focuses on the outward appearances of the approach, we cannot assign it a true biological value,” he added.
The study authors admitted that the decline in the viral load in the samples’ bodies was modest, but they indicated that their results are similar to those issued by animal studies of drugs that have achieved success in humans.
The researchers wrote in their report, “These results are promising with regard to achieving a similar therapeutic effect in humans, in addition to gaining long-term efficacy in the context of the work of this virus, which is constantly changing.”
It should be noted that the ACE2 enzyme is the target site of many coronaviruses mainly in humans – and in non-human mammals. Finally, Torchia said, the success of the ACE2 pseudo drug approach would make it a ready-to-go type of treatment against any other coronaviruses circulating between species.
* «Los Angeles Times»
– Tribune Media services