Al-Rahi warns of a “police atmosphere” in Lebanon 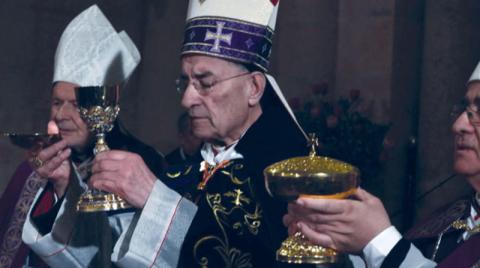 Maronite Patriarch Bechara Al-Rahi rejected the “authoritarian and police atmosphere” in Lebanon, criticizing the politicization of the judiciary, and speaking of “fabrication of politicized and selective accusations and lawsuits” and the exploitation of “the power of some judges.”

Al-Ra’i said in his Sunday sermon (yesterday): “How long do you officials and those involved in political affairs continue to subjugate our people, and prevent them from expressing, complaining, opposing and raising their heads, and blowing up solutions, to block Lebanon?” He stressed that “the right to express an opinion is born with the human being and is guaranteed by the constitution in Lebanon.” These repressive methods do not resemble Lebanon, which spent its history defending freedoms, which is its message, that persistence in repression establishes a popular uprising whose extent and results no one can predict.”

Al-Rahi described the state of the judiciary in Lebanon as “sad and dangerous”, asking: “Where are the honorable judges? Where are the judicial references – not performing their final duties to protect the judicial body? And where is the authority – it does not deter itself from exploiting some judges, nor does it deter those who abuse its role? Is the aim of some shocking measures to create a reality that leads to the disruption of the parliamentary elections on time, and to hold the party responsible for this national crime that really wants it to happen? This constitutional entitlement must take place and be followed by the election of a new President of the Republic two months before the end of the term of the incumbent in accordance with Article 73 of the Constitution. The new president would lift the country up from the axes to neutrality, and put an end to this collapse and destruction. Lebanon is not the property of a faction, but rather it belongs to the people, history and the future.”
.

This week, Cherlynn is joined by guest co-host Sam Rutherford to break down everything Samsung…