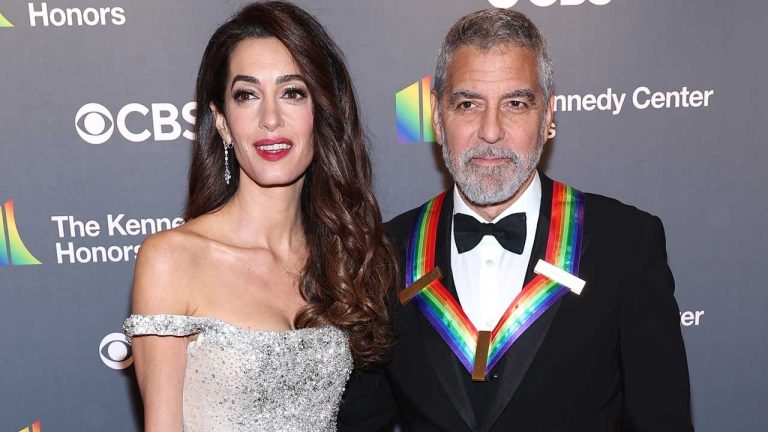 George Clooney and wife Amal Clooney are making sure their kids grow up with their core values — and their senses of humor.

The superstar couple stunned on the red carpet at the 45th Kennedy Center Honors on Sunday in Washington, D.C., where the Oscar-winner was one of the night’s celebrated honorees. The pair spoke with ET’s Deidre Behar at the event, and opened up about their 5-year-old twins — Ella and Alexander — and the coming holidays.

The kids have some great presents headed their way as well — including a train set.

“If I ever get it put together,” George joked. “Because that’s the hard part.”

The actor has said before how his adorable kids are incredibly smart, and Amal couldn’t agree more, sharing, “They certainly out smarted us.”

“And they have a language that they speak that we don’t speak,” she added.

“Yeah, she speaks French, so they got me coming and going, I don’t know what to do,” George added with a laugh.

It turns out, they also have their parents’ sense of humor, with a particular penchant for pranks and some apparently inappropriate jokes.

“They have some jokes that they play, they’re so filthy, I’m not even allowed to tell you,” George shared.

“Whose contribution do you think this is, in parenting?” Amal chimed in, subtly laying the blame at her husband’s feet.

Truthfully, the parents couldn’t be prouder, with George beaming, “We just totally raised nice kids who care about people and put other people ahead of themselves.”

“It’s the same thing we were both raised with, which was, ‘To whom a lot is given, a lot is expected.’ So we’re going to expect a lot of our children,” he added.

As for the night’s big ceremony and the coveted award, George marveled, “I have to say, it’s a really beautiful honor, it’s such a fun thing. I’ve never I’ve never been to the honors before and what a fun weekend it’s been. We had a great time at the White House, we had a really wonderful time at the state department, last night. So it’s it was actually very emotional. It’s fun to be around people who are also friends of yours who are receiving this.”

“The White House was Christmas-y and, you know, when I get to the state department I’m usually working,” Amal shared. “So it was nice to be in a lovely ballroom, and celebrating George and all the honorees.”

There was a time in the last century when we, quite foolishly, believed incineration to…